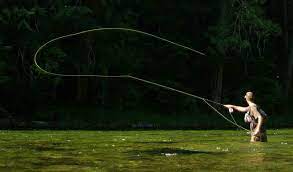 Fly fishing is solitary, contemplative, misanthropic, scientific in some hands, poetic in others, and

laced with conflicting aesthetic considerations. It’s not even clear if catching fish is actually the

point. But to Dr. Charles Thomas “Chuck” Moxley, fly fishing was his peace. On September 21,

2021, Chuck took his seat on the bank of a trout stream in heaven, fly rod in hand.

November 1962 where he and the family stayed until they moved to Rootstown (1968), and

eventually landed in Barnesville, Ohio (1970). He graduated from Barnesville High School in

1978 where he was a student athlete on the wrestling and football teams. He continued his

education at The Ohio State University (1978-1983), where he graduated with a degree in

Agriculture Education. Competing in wrestling for the Buckeyes, Chuck was a 3-year letter

winner, scholar athlete, and recipient of the Corwin A. Fergus Memorial Scholarship awarded to

an advanced degree from The Ohio State University School of Veterinary Medicine (1983-1987).

Columbus was also the place he met the love of his life, Cheri Lynn (Arvanitis) Moxley, in the

and writing notes on napkins in the commons. Chuck adored Cheri from the moment they met

and that love lasted the remainder of his life. They were married August 18, 1984, in Warren,

Ohio. They have two children, Tyler Christian Moxley and Jordan Taylor Smith (Kevin) whom he

loved dearly. Chuck was a family man who took great pride in his children’s accomplishments,

attending every important event and sharing in and celebrating all of life’s moments, big and

small. Providing love and a future for his wife and beloved children was his everyday focus.

sons Nikko and Carter). He was preceded in death by his parents and in-laws, Janyce and

A Doctor of Veterinary Medicine, Chuck had a 30-year career at Town and Country Veterinary

Hospital and Parkman Road Clinic in Warren, Ohio. The hospital was a passion project of

Chuck’s with a goal of having it ranked as one of the top 10 vet clinics in the United States. A

goal, like most of his, he achieved with his wonderful staff/family in 2008 when the clinic was

featured in Veterinary Economics Magazine. Chuck leaves his practice in good hands, with

much love and respect for his colleagues and clients.

through his work on the board of Believers Christian Church and Maplewood School Board. A

mentor and coach, Chuck delighted in seeing people realize their full potential- on the track, in the classroom, or on the gun range. In his free time, you’d find him fly fishing, tying his own flies

(for which he is renowned worldwide), and cheering on the Buckeyes.

The family is thankful to Dr. Larry Woods and the staff at Trumbull Memorial Hospital for their

exceptional care. We’d also like to thank the caring staff at Mangiarelli Rehabilitation who

ensured Chuck’s last days were like he always knew working toward a goal and training.

To honor and celebrate Chuck is to remember that he was all of the things in the quote above, a

scientist and an artist, a coach and a student, an integrator, and a problem solver. The

stereotypical fisherman stories don’t apply to the life he lived. He was larger than life-and he

always had a story to match. We miss those tales already. We love you Chuck, rest easy on the

In memory of Chuck, the Dr. Charles T. Moxley Memorial Scholarship Fund has been founded,

which will provide assistance to a local student wishing to attend veterinary school. Donations

can be made out to Charles T. Moxley Memorial Scholarship Fund and sent to PO Box 773

Please join us for a celebration of life for Chuck. We will gather together on Saturday, October

Family and friends may visit www.peterrossiandsonfh.com to view this obituary, sign the guestbook, and send condolences to the family.