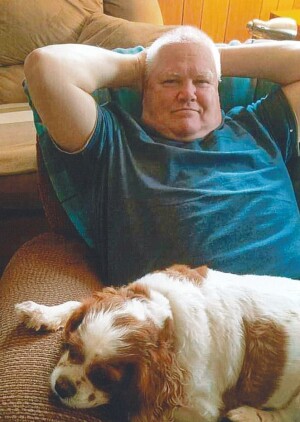 Bristolville - Roy Pankuch, 64, passed away Tuesday February 16th at Hillcrest Hospital in Cleveland due to complications from Covid-19. Roy was born on January 25th, 1957 in Warren Ohio. He was the son of the late Donald and Laura (Cox) Pankuch. He leaves behind his wife of 38 years Elizabeth, his daughter Megan (Matt), his son Gregory (Caitlyn), and his cavalier spaniel Lilly.

Roy graduated from Warren G. Harding High School. He worked in Solon at the King Nut Company as the production and operations manager on the afternoon shift.

Roy lived life large. He did nothing small. Earlier in Roy’s life he owned Diggins restaurant in Mecca. Diggins was a small restaurant on Mosquito Lake but was a big part of the community.  The restaurant was famous for pizza and a fish fry on Fridays. Roy used his talents to help others. For many years he sponsored and prepared a free community turkey dinner with donations going to the Salvation Army to purchase toys for children at Christmas.  He had estimated to have cooked two hundred turkeys over the years. Many sheets of pizza went to the local schools to feed their sports teams. Roy loved cooking and would make large pots of spaghetti sauce and soup and share them with neighbors and friends. Roy also enjoyed golfing and Cleveland sports.  Opening day with the Cleveland Indians was a family holiday and tradition.  Roy enjoyed traveling, his favorite destinations include Hawaii, Cape Cod, Las Vegas, Savannah, and especially the Florida Keys where he vacationed through two hurricanes.

Most importantly, Roy will be remembered as a loving husband and father. He enjoyed attending every game of Mount Union football, where he watched his son and daughter in the Purple Raider marching band. He was most proud upon their graduations.

Arrangements were entrusted to the professional care of the Peter Rossi & Son Memorial Chapel of Warren, Ohio.

To send flowers to the family or plant a tree in memory of Roy Pankuch, please visit our floral store.

You can still show your support by sending flowers directly to the family, or by planting a memorial tree in the memory of Roy Pankuch
Share a memory
© 2021 Peter Rossi & Son Memorial Chapel. All Rights Reserved. Funeral Home website by CFS & TA | Terms of Use | Privacy Policy